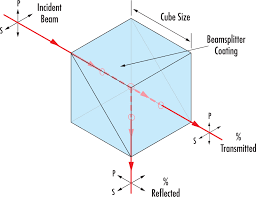 Differentiating beam splitters have very important as will guide you properly when choosing the beam splitters that suit of fits your choice of project or use. They range from shapes, designs, modification, wavelength, dimensions, polarized and non-polarized and so much more. All these factors and more have been employed to differentiate beam splitters. Beam splitters take on many forms; cubes, plates, hexagons, pentagons, polarizing, non -polarizing (usually somewhere in between), narrowband, broadband, dielectric, air-spaced, metal, cemented, optically contacted (epoxy-free bonding). You have known these you can now be guided to sort specifications that will meet your needs in performance and cost. Apart from their shapes and forms, another important factor to consider when choosing a beam more split is the wavelength, polarization(polarizing and non-polarizing), and physical size requirements. Also, if the beam splitter will be used inside an interferometer, you may need to consider path length and phase matching requirements.

This is an integral part of the products optics optical mirrors, it functions by dividing incident light into two. It is deployed mostly in some measurements device like an interferometer, optical experiments (devices), and in telecommunications (fiber optics). These beam splitters have semi-transmitting surfaces.

These beam splitters are mainly used in fluorescence applications and experiments. They function by splitting light beam with wavelength.

These beam splitters are constructed using two right-angled prisms. One of the prisms has a hypotenuse surface which is coated and the others are cemented together to form a cubic shape. It shortens the optical path of the system producing an equal transmitting and reflecting optical path length and there is no beam shift.

This is constructed using a flat glass that has been coated on the first surface of the substrate while coating using an anti-reflective agent to coat the other surface to remove the unwanted reflection. This beam splitter is light owing to the thickness of the glass that is used in producing as it is very flat. In the same vain considering quantity of materials employed in its production, it is also affordable. It’s is also easy to go into mass production.

This continually divides beams according to their wavelength.

Deciding on the best CBSE schools in Kharadi Pune

Professionally Networking While In College

Understand the Importance of the Meaning of Life

8 Reasons Why Online Education is Better than Traditional

UPSC Exam is a Challenging Exam to Pass

What Is The Process Of The MBBS Admission In India?